You are here: Home / Treatments / TAVI 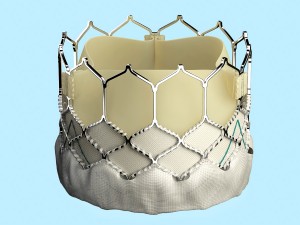 Older people often suffer a calcification of the aortic valve. After a few years, this leads to the valve no longer being able to open and/or close normally. If the function of the valve is highly impaired, the aortic valve must be replaced. This can be achieved either via an operation or – since the last few years – a catheter-assisted procedure called TAVI. The operative approach has been tried and tested over many years and is still considered the standard procedure. During this, the chest is opened, the old, calcified valve cut out and the new valve sewn in. There are replacement valves made of metal and synthetic material as well as so-called “biological valves” made of pericardium (heart sac). This biological valve – which becomes folded onto a catheter along with a stent as a support – has been around for about five years now. Using a catheter, this type of valve can be passed through the femoral artery and aorta into the heart and then unfolded into the old, calcified valve. Today, TAVIs represent an alternative to surgical valve replacement. The type of valve that you will be given, depends on your age and accompanying illnesses. Dr. Rampp and Dr. Matula are specialists in the TAVI procedure at the group practice. Both doctors routinely implant TAVI valves at the German Heart Center Munich.